San Juan Call number: GM 022
For 2 to 4 players.
Duration of play: 45-60 minutes.
Players travel to the capital city of Puerto Rico and compete to build palaces, poor houses, silver smelters, gold mines and many other features. San Juan is based on the highly acclaimed and awarded Puerto Rico but is a separate card game, that anyone can play whether they have played Puerto Rico or not.

Bohnanza  Call number: GM 023
For 2 to 7 players.
Duration of play: 45 min.
Each player plants beans in 2 or 3 fields and tries to sell them as profitably as possible. When selling beans, a player earns more gold for more beans of the same variety. The goal of the game is to earn the most gold planting, harvesting, and selling beans.

Race for the galaxy Call Number: GM 026
For 2-4 players.
Duration of play: 30-60 minutes.
Players build galactic civilizations with game cards that represent worlds or technical and social developments. The winner is the player with the most victory points.

A fool's fortune  Call number: GM 030
For 2-3 players.
Duration of play: 45 minutes.
A two player card game in the tradition of Rummy, where players race to make sets but with several twists. The first player to complete three sets can win a fool's fortune. The rulebook also provides instructions for a three-player game.

Warhammer invasion : the card game Call  number: GM 027
A game played in three zones: the kingdom, the quest zone, and the battlefield. The goals are to acquire resources in the kingdom, draw more cards in the quest zone, and attack the opponent in the battlefield. Attacking the opponent leads to the ultimate goal of burning down the sections of his capital. The first player to burn two of the three sections of his opponent's capital wins the game.

Cavemen : the quest for fire Call number: GM 035
For 2-5 players.
Duration of play: 45-60 minutes.
This is a game of strategy set in the prehistoric age. Players take the role of tribal leaders who compete for opportunities to hunt dinosaurs, expand their influence and discover new technologies. Be the first to discover fire. 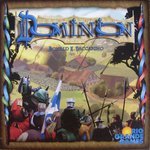 "You are a monarch, like your parents before you, a ruler of a small pleasant kingdom of rivers and evergreens. Unlike your parents, however, you have hopes and dreams! You want a bigger and more pleasant kingdom, with more rivers and a wider variety of trees. You want a Dominion! In all directions lie fiefs, freeholds, and feodums. All are small bits of land, controlled by petty lords and verging on anarchy. You will bring civilization to these people, uniting them under your banner.

But wait! It must be something in the air; several other monarchs have had the exact same idea. You must race to get as much of the unclaimed land as possible, fending them off along the way. To do this you will hire minions, construct buildings, spruce up your castle, and fill the coffers of your treasury. Your parents wouldn't be proud, but your grandparents, on your mother's side, would be delighted."

Ra : the dice game Call number: GM 031
For 2-4 players.
Duration of play: 30 to 45 minutes.
Players try to score by collecting Paraohs, niles and floods, monuments and civilizations. Players must also watch out for disasters and each of the three rounds ends when "Ra" shows up a set number of times. After three rounds, the player with the most points wins.