Salt of the Earth: The Movie Hollywood Could Not Stop

“When director Elia Kazan’s On the Waterfront opened in 1954, critics and audiences hailed the gritty movie about Hoboken dockworkers and applauded Marlon Brando’s performance as the ex-boxer who ‘coulda been a contender.’ At the next Academy Awards ceremony, On the Waterfront won Oscars for best film, best director, best actor, and best supporting actress.

Another movie about beleaguered workers opened to quite a different reception that same year. Like Kazan’s film, Salt of the Earth was based on an actual situation, in this case a mining strike in New Mexico. Both movies were shot on location with the participation of those who had lived the real stories. And both movies shared a history in the Hollywood blacklist. There the similarities ended. Kazan and his writer, Budd Schulberg, had both named names — identified movie people they said were Communists — when questioned by the House Un-American Activities Committee (HUAC). Some saw their movie, in which Brando’s character testifies against the racketeers who run the docks, as an allegory in support of informing. The people behind Salt, in contrast, were unrepentant blacklistees whose leftist political affiliations derailed their careers during the Red scares of the 1950s. On the Waterfront was a hit and is remembered as a classic film. The makers of Salt of the Earth struggled to find theater owners willing to show their incendiary movie.”- Steve Boisson and originally published in the February 2002 issue of American History Magazine.

Salt of the Earth- the opera

Esperanza – David Bishop
“With the stain of Red-baiting long since vanquished, the themes expressed by Salt of the Earth and Esperanza seem remarkably innocent today: racial and gender equality, workers&#146; solidarity, and corporate accountability. However, this is a story that succeeds on the strength of its innocence and idealism. The strike has mythic overtones because the miners and their wives experienced their struggle in mythic terms. Esperanza has reached back across the decades and reclaimed a measure of dignity for an honorable motion picture that was sucker-punched by McCarthyism.”- CultureVulture 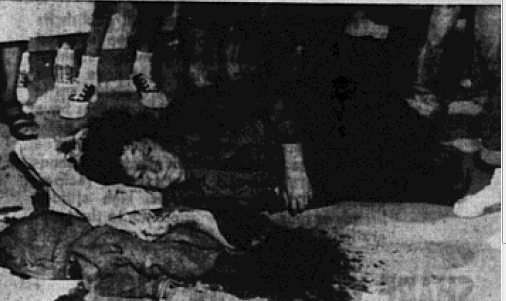 Image from The New Mexican, Sunday, January 20, 1952 showing a women hit by a car while at the picket line. The assault occurred August 23rd, known as Bloody 23rd.

A Family Effort in the Empire Zinc Corporation Miner’s Strike.

“The women’s picket was carefully organized, militant, and successful. Not only did wives of Empire strikers, such as Henrietta Williams and Virginia Chacón, walk the line; many women from other towns in Grant County also participated. When County Sheriff Leslie Goforth ordered 53 women arrested on June 16, another 300 women took their places! The women and their children were jailed, their protests behind bars drew national attention, and they were soon released. While Judge Marshall did issue a subsequent ruling that the women were also covered by the injunction, months went by before the sheriff tried again to enforce the order. While the union was politically isolated from the CIO leadership and many AFL unions, the strike had broad support among Mexican Americans in New Mexico. This helped stay the hand of Governor Mechem who refrained, for several months, from using state police to reopen the mine.(Silver City Sun News)”  Posted on October 23, 2014 by Metta Center

Below is a transcript from the Silver City daily press and independent, August 17th, 1951

Board Examiner Says Company Refused To Bargain in Good Faith

Washington (AP)-A national labor relations board examiner found today that the Empire Zinc co. engaged in unfair practices in dealings with the Bayard local of mine, mill and smelter workers.

He found that the strike called Oct. 17, 1950 by union at Empire’s Hanover workings was caused by the company’s refusal to bargain in good faith.

“In summery” the examiner said, “it is concluded and found that on Sept. 27 and 29, 1950, and on March 13 and June 7 1951, the respondent (Empire Zinc) refused to bargain collectively with the union… and that by such refusal the respondent has interfered with, retrained and coerced its employes…”

Whitmore recommended the company cease interference in collective bargaining and employes union affairs and post notices to that effect at its Hanover mine near Silver City.

If the company didn’t notify the board of its willingness to comply within 20 days. Whittemore recommended orders be issued to require compliance.

The company had charged the strike was called unfairly. Whittemore found proper notice had been given for negotiation on a new contract June 15 and July 10, 1950 and that there were negotiation meetings on July 18 and eight other occasions before the strike on Oct. 17.

On Sept. 29, Whittemore said the company announced a 5-cent an hour wage increase arbitrarily before union-company negotiations were broken off. “Moreover, the language of the announcement, in the opinion of the trial examiner, indicates an attempt on the part of the respondent (Empire Zinc) to circumvent the union by stating that the increase was given because of the failure to reach an agreement with the union on negotiations of a new contract.”

On March 13, 1951, the examiner said the company made a back to work offer that constituted “individual bargaining.” By this attempt, he said the company “thereby bargained in bad faith with the union.” The offer announced an increase of 15 cents including the five cents offered in October.

On June 7, the examiner said, the company announced by letter to search employee that the plant would be open on June 11 with the increase in pay previously offered to the union.

“The trial examiner concludes and finds that the respondent’s (Empire Zinc) communication to individual employers infer the circumstances here described, constituted refusal to bargain in good faith with the union.”

In connection with the company claims of an outlaw strike, the examiner said:

“it is clear from the testimony of S.S. Huyett, superintendent, that it was (Clinton) Jencks who asked to meet on Oct. 10, and Jencks who urged that C.E. Graves (Empire Zinc negotiator), who had absented himself from the city, return as soon after that date as possible for further negotiations.

“Furthermore, the union had been voted authority to call a strike before the Sept. 29 meeting. Had the union itself broken off negotiations at that meeting, it is reasonable to believe the strike would immediately have been called, not delayed until Oct. 17.”