Salt of the Earth: Home

Salt of the Earth 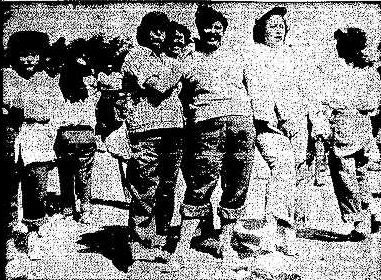 Inspired by their struggle, blacklisted screen writer Michael Wilson wrote a script, which after revisions, was directed by Herbert Biberman. The actors, mostly member of the mine union and their families, suffered threats and attacks as rumors spread that the film crew were all communists.

This gritty, realistic film depicts the fight for racial and gender equality in a mining town with scenes that still resonate strongly with a modern audience.

About Salt of the Earth

What was the name of the mining company?

The strike was against the Empire Zinc Company near Silver City, New Mexico.

What where they fighting for?

Pay based on the time spent in the mine (collar-to-collar), a paid holiday, safer working conditions, wage differentials linked to industry-wide scales, ending the “Mexican wage” and equality. In response to negotiations Empire Zinc refused to bargain in good faith and offered a 5 cent per-hour raise while increasing the work week by 8 hours.

When did the strike happen?

What happened to strikers on the picket line?

Violence against the female strikers included being hit by cars[2], tear gas and beatings. One man was shot.

Why did deputies attack the strikers?

Salaries of Sheriff Leslie Goforth’s deputies were paid by the mining company.[1] Some assaults were by vigilantes.

Was anyone ever charged with attacking the strikers?

Marvin Mosely and Bob Capshaw were charged with assault of female picketers but were acquitted.*

How many women and children were arrested?

Did the strikers fight or defend themselves?

Women “held the line” by throwing rocks, pepper and chile sauce.[4] There was at least 1 car "demolished" by protestors.

Who was trying to blacklist the movie?

As a result of Jackson’s efforts film labs would not process the film and most theaters would not show the movie out of fear of reprisals by the big Hollywood studios.