African Americans in WWI and on the home front 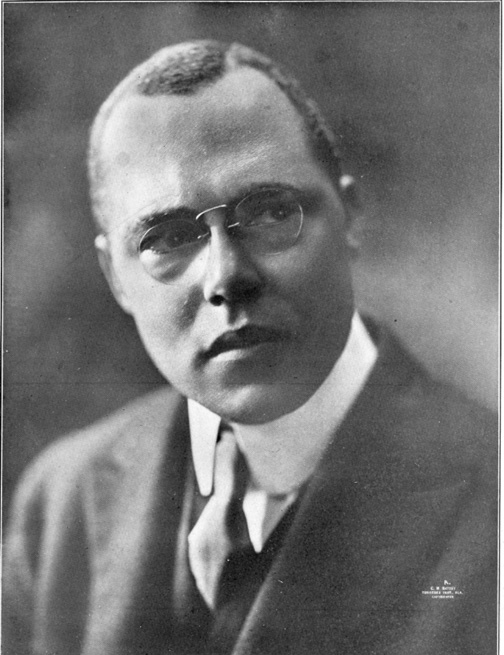 Emmett J. Scott was Special Assistant to the Secretary of War for Negro Relations during WWI.

"Scott, for many years the private secretary to Booker T. Washington and later secretary to the Tuskegee Normal and Industrial Institute and the National Negro Business League, was charged with looking after all matters affecting the interests of African-American soldiers and citizens during the war. "-Papers of Emmett J. Scott-Special Assistant to the Secretary of War, 1917-1919

His book The American Negro in the World War documents the African American experience both at home and abroad. 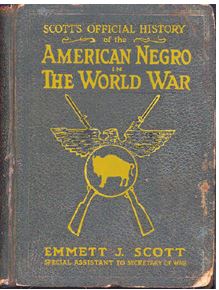 Learn more about a poster on display in this episode of the History Detectives. 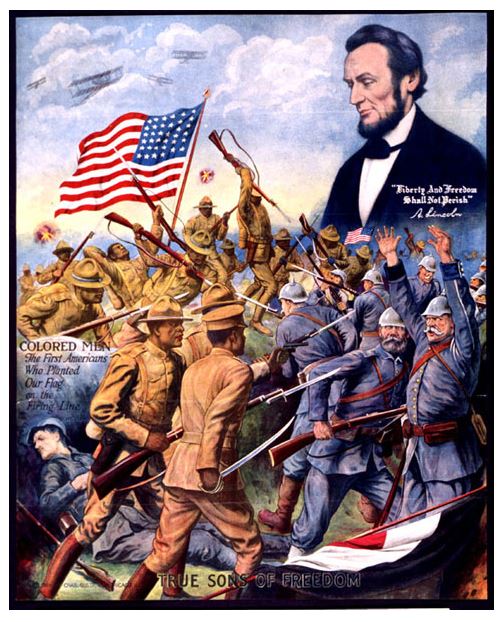 The 369th Regiment d'Infanterie Etats Unis (United, States Infantry), also known as the Hell Fighters were one of the most decorated units of WWI. Under U.S. command they performed manual labor but after being transferred to the French military they were treated as equals in the trenches. This short film was created by the French Consulate to show that France still honors their bravery and sacrifice.

A fight just to get there

Due to the rampant racism of the time many African Americans found barriers when they tried to register for the draft. Emmett Scott wrote in African Negro in the World War:

“While it is true, and only fair to state, that Negro men, in many cases, were not treated as equitably and justly as white men in the application of the draft law, and that in certain sections they were made victims of many errors, irregularities, and injustices in the matter of classifications, inductions, etc., yet it is a fact that three Local Draft or Exemption Boards were removed from office by the Secretary of War, because it was proven that these Exemption Boards had flagrantly violated the Selective Service Regulations by discriminating against Negro draftees…”(51)

Once at the training camps the troops were segregated with separate barracks, and eventually separate clubs for entertainment. Conditions in these camps, especially those in southern states, could be terrible. There was more then on instance of a race riot starting after an African-American soldier was assaulted. 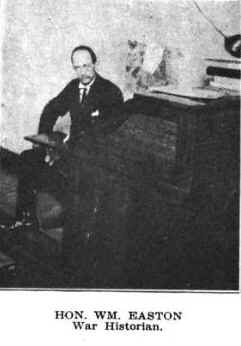 "Hon. Emmett J. Scott selected Mr. Easton as a member of the National Bureau of  Speakers for the War Department, the first appointment of the race west of the  Mississippi, and since, he was selected a member of the "Four Minute Speakers" by  Hon. Marshall Stimson, the director for Southern California. The most recent honor to  come to Mr. Easton has been his appointment as chairman historian for the race's war  activities during the trying times of this great international struggle, worthy of a place  in the volumes that will be published by the State Council of Defense. "- The Afro Texan Press - Taken from infromation from:
Delilah L. Beasley, The Negro Trailblazers of California, Los Angeles, published by the author, 1919, reprint, 1998, N.Y., G. K. Hall & Co.

More on this person in the comment under Emmet Scott in the left-hand column. 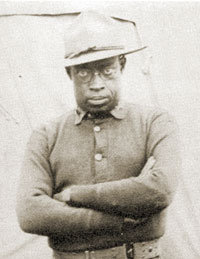 "Eubie Blake said of James Reese Europe, "He was our benefactor and inspiration. Even more, he was the Martin Luther King of music." Europe earned this praise by being an unflagging innovator not only in his compositions and orchestrations, but in his organizational ability and leadership. One of America's greatest musicians, he progressed from strength to strength but was pointlessly cut down at what seemed like the pinnacle of his career."
-James Reese Europe, 1881-1919 [biography] 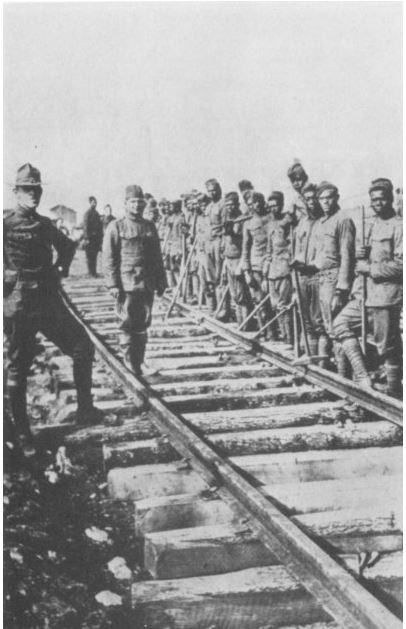 Although they recieved military training the majority of black soldiers spent the war as laborors building roads, docks and Laying tracks. These men provided vital sercvices of  structural steel workers, bricklayers, teamsters, hostlers, wagoners, axemen, cooks, bakers, musicians, saddlers, crane operators, welders, rigging and cordage workers, stevedores and longshoremen. The war could not have been won with out their efforts. 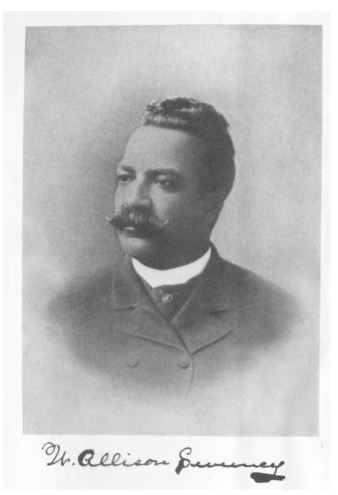 Another book documenting the service of African Americans durring the war is: History of the American Negro in the Great World War; his splendid record in the battle zones of Europe, including a resume of his past services to his country in the wars of the revolution, of 1812, the war of the rebellion, the Indian wars on the frontier, the Spanish-American war, and the late imbroglio with Mexico (1919) by W. Allison Sweeney. Sweeney was a journalist in Chicago.