Laws on sex discrimination in employment 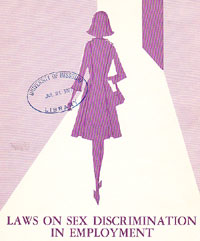 What was going on?

1960 Diane Nash, one of the unofficial leaders of the Nashville sit-ins, and over 5000 others confront Mayor Ben West  on April 19, 1960  regarding the attempted murder of a prominent  attorney.. - Library of Congress

1965 In Griswold v. Connecticut, the U.S. Supreme Court rules that Connecticut's ban on the distribution of contraceptive devices or information is a violation of married couples' right to privacy.
Listen to oral arguments from OYEZ.

1974 Listen to Barbara Jordan's Statement at the U.S. House Judiciary Committee Impeachment Hearings, part of Say It Plain: A Century of Great African

1978 The Pregnancy Discrimination Act is passed.

1973 In Roe v. Wade, the United States Supreme Court rules that women have a right to abort a fetus during the first trimester of pregnancy.

Read more about these cases in the Official reports of the Supreme Court Call Number JU 6.8/A: